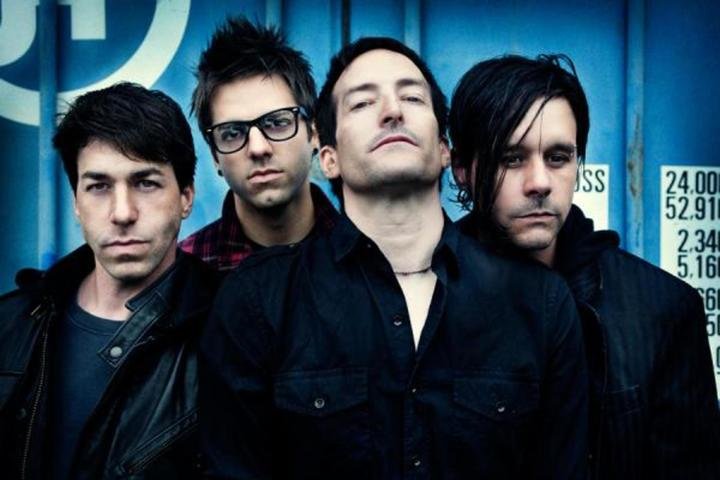 Shoving a fist in the face of tradition has been Filter's modus operandi since the release of their self-produced debut album, Short Bus. The album's rough-around-the-edges production consisted of inebriated answering machine samples, lavish bass lines, and jagged guitars set to a backdrop of drum machines punctuated by the unfurling of Richard Patrick's vocal prowess and signature roar. Patrick, Filter's magnetic, profoundly intelligent nucleus and frontman jubilantly admits that his creative process is unorthodox, whether he's staring down and conquering new technology or coalescing with new bandmate and co-conspirator Jonny Radtke on Filter's current release, The Sun Comes Out Tonight.
Patrick believes in adapting and improvising in the name of achieving results, fully aware of what he's rebelling against. He addresses his unconventional methods with utmost conviction in his voice, "Let's break the rules, let's put a finger up to the establishment and do something wrong. If William Shakespeare was alive today, he'd be using a word processor. He'd be copying and pasting. Does that change things? Yeah, but at the same time, it's flexible and different. It has to be done." This perspective is evident on The Sun Comes Out Tonight's lead single, "What Do You Say," an explosive track featuring Patrick's rousing howl, hypnotic synthesizers, smoldering guitars, biting lyrics, and the triumphant resurrection of the pulsating drum machines that cemented Filter's reputation for delivering a distinctive sound unlike any other band in existence. Patrick laughs, "It's all drum machine, just like Short Bus! I like that we're getting away with something that's wrong. There's almost this notion that someone like Skrillex is less of a talent because his music centers around making a computer do incredible things. Music is an interpretive art form."
"The Only Way (Is The Wrong Way)" isn't merely a stand-out track from 2002 release The Amalgamut, it's an integral component of the career Patrick has fabricated with Filter as a truly capable multi-instrumentalist and vocalist hell-bent on releasing top-notch material and delivering electrifying, intense live performances. Patrick's many collaborations and side-projects have transcended the boundaries between rock, industrial, and electronic music by utilizing the talents of musicians Trent Reznor, Robert and Dean DeLeo, Ray Luzier, Josh Freese, John 5, The Crystal Method, Danny Lohner, Clayton Worbeck and Wes Borland.
The Trouble With Angels, Filter's inaugural venture with producer Bob Marlette culminated in Patrick cleaning the slate and solidifying a new live band line-up before embarking on tour across North America and Europe in support of the album. Filter's affiliation with the organization Stars For Stripes allowed the band the honor of entertaining US troops on military bases in Kuwait, Iraq and Cuba's Guantanamo Bay Naval Base. Patrick, a fervent supporter of the men and women serving the United States, takes immense pleasure in meeting and performing for deployed fans; he and his bandmates gained deeper insight into the lifestyle those serving face on a regular basis when the band survived rocket attacks in Kirkuk, Iraq.
The Sun Comes Out Tonight heralds the return of Marlette in the roles of producer and co-writer, and marks the introduction of Filter's newest addition, co-writer, and guitarist, Jonny Radtke. Hailing from Chicago, Illinois, Radtke's rapturous vocals and elegantly furious guitar playing mesh expertly with Filter's ambiance. "Jonny is the little brother-slash-guitar player I never had, he's just incredibly talented," Patrick affectionately admits. "Because of his talent and my connection with him, it was such a joy to make this album, it's a very inspired record. The chemistry was there. I really can't say enough about Jonny." Radtke's own predilection for rebellion and versatility are hallmarks of his own one-man musical project, the ethereal Polar Moon. Prior to joining Filter, Radtke's guitar stylings were best known for gracing the stage with his previous band, Kill Hannah, and the live incarnation of Ashes Divide, led by Billy Howerdel of A Perfect Circle.
Patrick proclaims, "It's a new guitar player, a new label - we're so grateful we signed with Wind-up Records, [label co-owner and Chief Creative Officer] Gregg Wattenberg is so supportive, the label is amazing; it's a whole new idea. It was so easy to be angry on this record, there are songs about betrayal and pure evil, there's so much heavy stuff [on this record] but there's moments of light, songs about happiness and love. It's our analysis of the human condition."
Tracks "What Do You Say", "This Finger's For You" and "We Hate It When You Get What You Want" seethe with vicious guitar riffs, blasting beats, Radtke's lilting background vocals, Patrick's gruff delivery, and captivating choruses that were made to sing along to. "With our first single, 'What Do You Say,' it's about all the noise - noise from the media, people talking and having so much to say but not really listening," Patrick thoughtfully states. One of the album's brightest moments of light comes courtesy of the shimmering, euphoric "Surprise," a track reminiscent of the delicate song structure that made runaway hit "Take A Picture" one of Filter's most beloved offerings.
The whimsical "First You Break It" draws you in with lush guitars and surging harmonies. The lyrics for "Watch The Sun Comes Out Tonight" paint an intimate portrait of Patrick's adventures at age 22 wandering around under the influence of psilocybin in the chill of Cleveland, Ohio late at night. "We'd search for things to look at, something that would trigger a profound thought of some kind," Patrick recalls, "I love writing about those times; I was young and angry but optimistic at the same time. Gregg Wattenberg took all of what he loved about early Filter and reminded me of it, he was like, 'you need to get back there and do what you do!', I've always been about pressing forward and stretching my audience's imagination but there's got to be a point of reflection."
The Sun Comes Out Tonight's synthesis of tools from the band's past and brand new attributes facilitate the stereophonic assault that only Filter circa 2013 can deliver.

Filter -Take A Picture from Ambient Waves on Vimeo.