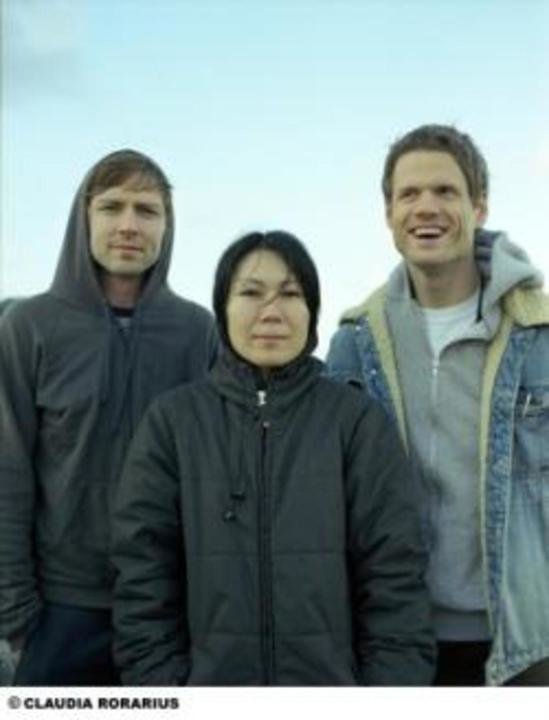 DDDRRRRHHHHFFFFFFF
By turns cuddly and chaotic, San Francisco's Deerhoof mixes noise, sugary melodies, and an experimental spirit into sweetly challenging and utterly distinctive music. The group began as the brainchild of guitarist Rob Fisk and drummer/keyboardist Greg Saunier in 1994. Vocalist/bassist Satomi Matsuzaki joined the group in time for 1996's self-titled double 7" on Menlo Park, but other members passed through Deerhoof, including Chris Cooper of Angst Hase Pfeffer Nase. The following year they released their full-length debut, The Man, the King, the Girl, on Kill Rock Stars and the Come See the Duck 7" on Banano a year later. Fisk left Deerhoof after 1999's Holdy Paws, an experiment that saw the band trying to write songs that favored composition over individual sounds, and pursued similar ideas in his solo work and in Badgerlore.
In 2002, the group released the critically acclaimed Reveille; 2003's Apple O' followed soon after, and also featured auxiliary guitarist Chris Cohen. Their fifth album, the much more cohesive and focused Milk Man, appeared in spring 2004. Their next album would be their most ambitious, and would go further than any other at both establishing Deerhoof within the mainstream, and being taken seriously as musical innovators and trendsetters. With the release in 2005 of The Runners Four, Deerhoof is widely recognized as the unique treasure that their early supporters always knew they were.
As if to underline this point, Deerhoof's music old and new is featured prominently in Dedication, the directorial debut of actor Justin Theroux, due out in 2007 and starring Billy Crudup and Mandy Moore. And in another surreal twist their album Milk Man is performed as an elementary school ballet at the North Haven Community School in Maine in late October 2006.
Popping up all over 2006 music news like a breath of fresh air, Deerhoof headlines the best-attended New York free concert of the summer, and becomes Danielson's backing band on the much celebrated Ships. Saunier's production work appears on Xiu Xiu's acclaimed album The Air Force, and meanwhile they are handpicked for two of 2006's most coveted summer tours, with The Flaming Lips and Radiohead. Along the way another turning point is reached as Cohen decides to leave Deerhoof to pursue his other band, The Curtains. Now Saunier, Matsuzaki, and Dieterich, returning to the lineup of Reveille, return as well to that same blank drawing board that has proven to be such a source of inspiration for Deerhoof time and again...
Ed Rodriguez (Flying Luttenbachers, XBXRX) joins the group in early 2008 as second guitar player, and the band starts writing songs for a new album....
Presented by