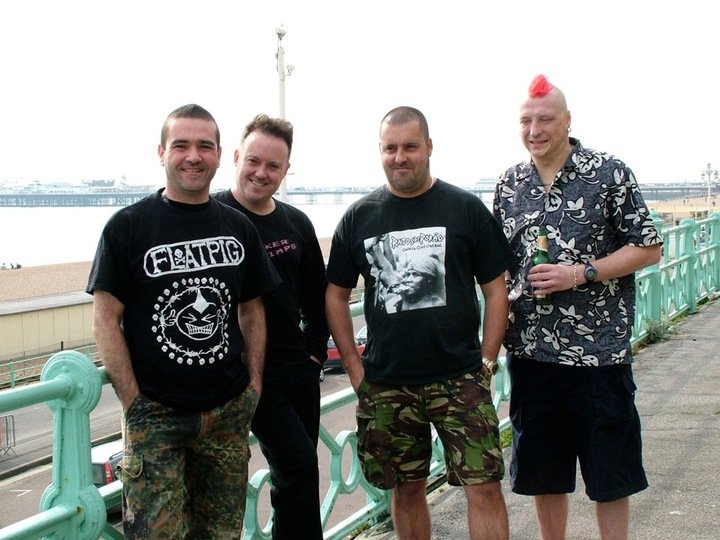 The roots of Riots stem back to 2000 with Swedish musicians (Mathias Svensson - guitar, Louise Hellman - vocals, Mari Eriksson - bass) meeting at a festival and having an idea to start a band. They recruited Danish drummer Allan Bosan to the band which was christened - Goldcrush.

They found a rehearsal studio in the depths of the Oslo anarchistic squat house - Blitz, and immediately began working on a set of songs, which they were to gig with over the next few years. Three demo's were recorded during these years, the latter of them getting good reviews in several music publications. After numerous pub, club and festival gigs, they sacked their drummer. A drum machine was used for the next six months and for the recording of their 4th demo before English drummer Paul Mileman stepped in. A lot of positive responses to this demo (February 2005), which co-incided with support slots in Oslo with the (International) Noise Conspiracy and U.K. Subs. In March they were selected as "unsigned band of the week" on NRK P3's Urï¿½rt show (Norway's national radio station) and playing two shows at the Oslo music day in June.

In 2006 they completed their first (and only... to date) UK tour, playing gigs in London, the east, the north and one great gig in Glasgow. In 2007 they were the backing band for punk rock legend Charlie Harper and 20+ U.K. Subs songs were learned and played in a small sweaty club in Oslo. Following this gig, internal conflicts came to a head, and a new vocalist was sought. Previously they had played with Oslo band The Curves, and vocalist Gisle Bangsund had caught their attention. The debut gig with Gisle was in 2008. In 2009 saw the first 7ï¿½ single release ï¿½ Another Train EP on blood red vinyl, this coincided with appearances at Oslo punk rock festival and several support shows in Norway for the U.K. Subs.

In the summer of 2010 they toured Europe for the first time, playing everything from small sweaty clubs to large festival stages in Holland, Germany, Czech Republic and Poland. A new cd was released for the tour. New songs were written and recorded and in 2011 they played a couple of festival shows in Germany before embarking on another summer European tour, this time 8 club shows in Germany and Czech Republic.

In November 2011 Goldcrush changed their name to Riots.
And in 2012, Riots release their first CD in April by Chinese label - Kids Union Records, and in May on 12" green splatter vinyl by Subversive Records in Oslo. Riots complete a 10 date tour of China in April/May, playing the legendary Midi Festival as well as numerous club gigs. Back to Norway they write new songs, and focus mainly on their home land of Norway, playing once more with Charlie Harper from the UK Subs, another blinding set of UK Subs songs. Riots also played for the first time in Bergen, 2 shows over a weekend. And repackaged in limited number spray paint covers are the releases on 7" + 12".

2013 starts quietly, with the main goal this year to play more shows in Europe, and work on the next release, scheduled for Sept/Oct. May sees the release of a special flexi disc, which the 200 + subscribers to Punkrock! fanzine in Germany get for free. 2 tracks - Riots and We're All Slaves feature on it, released by Subversive Records (SUB003). In June there are plans to play 3 shows in northern Germany to promote the flexi release, 3 in September in Czech Republic and back to Germany in November for 3 or 4 shows.
Presented by