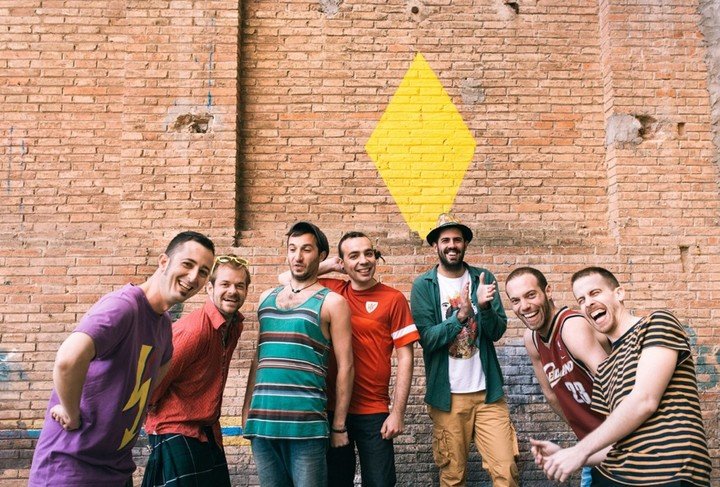 revulsiu (‘revulsive’ in English): something that causes a sudden strong change or reaction.

El revulsiu is the aptly named fifth album from La Pegatina. It’s a word that perfectly describes what happens when the Catalan group hits the stage. Their festive spirit, their energy, and their connection with the audience is apparent from the outset, and has them whipping up a storm wherever they play.

Marc Parrot has once again acted as producer, reining in these seven samurai, these masters of frenzied rhythms, so that their songs can be listened to at home and enjoyed to the full, whether you jump up from your chair to dance or not (though you definitely should). Because if one thing is clear on listening to these thirteen new songs, it’s that they are full of catchy sing-along choruses that will make them instant anthems, something that La Pegatina seem to pull off with remarkable ease on album after album. Many would kill for that ability.

But watch out, because when it comes to La Pegatina, be prepared to be surprised. Case in point: as soon as you hear the song that opens the album, “Heridas de guerra”, you are hit hard with a sharp electric guitar. As all their fans know, this is something totally new for the band, and when combined with the acoustic guitar, the bass, the drums, the accordion, the trumpet, and the always effective percussion, it will only add more power to their high-octane live shows. And as expected, there are many more surprises. But don’t be alarmed. Different musical styles come and go, combining with their lively urban rumba, providing every colour imaginable, and vindicating the purity of the impure and the richness of the fusion of genres.

Once again, La Pegatina have invited many other artists to collaborate with them in order to show, as Antonio Machado said, that “you make the path as you go”, but above all, you make friends, friends whom it is a pleasure to invite to the musical fiesta that each one of their albums turns into. On this occasion, we find Bosnian agitators Dubioza Kolektiv, the bohemian Capitán Cobarde from Sevilla, Madrid revolutionaries Ska-P, Mongolian punk-folk outfit Hanggai, singer and rapper Ms Maiko from the Canary Islands(what a great combination female vocals and La Pegatina make!), MC Rayden from Madrid, alternative Argentinian rockers Onda Vaga, wild Japanese orchestra Turtle Island, and the amazing and surreal Oques Grasses from Catalonia. As you can see, they are spoilt for choice.

And let's not forget those infectious lyrics in Spanish, Catalan and French. Lyrics that are all about fun and enjoyment like “No som d’aquí”, or that are more reflective like “La sombra”, “Apagafuegos” and “Bananeres” (God bless Haruki Murakami), or that are more direct and defiant like “Una mirada” or that posthumous homage to revolution that gives the album its title, “El revulsiu”.

As Marc Parrot says, “this album is their most compact, yet it remains stylistically diverse, because their personality shines through so strongly.What’s more, they exude an authenticity that can be seen in everything they do and in the way they do it”. Because in their twelve years as a band, they haven’t lost any of their freshness, haven’t changed their ideas or their uninhibited performance style, and haven’t lost any of that rapport that has characterised them
throughout their career.

With this album, they are going to spread their music even further internationally. And if they have already made audiences dance to their beat all over Europe and as far afield as Canada, China, Japan, Ecuador, Uruguay, Argentina and Chile, then the rest of the world should be prepared. La Pegatina is coming.

And you know what their secret is? Their genuine work ethic. La Pegatina are back with their batteries fully charged, ready to release all that energy on stage. Let’s enjoy it with them.