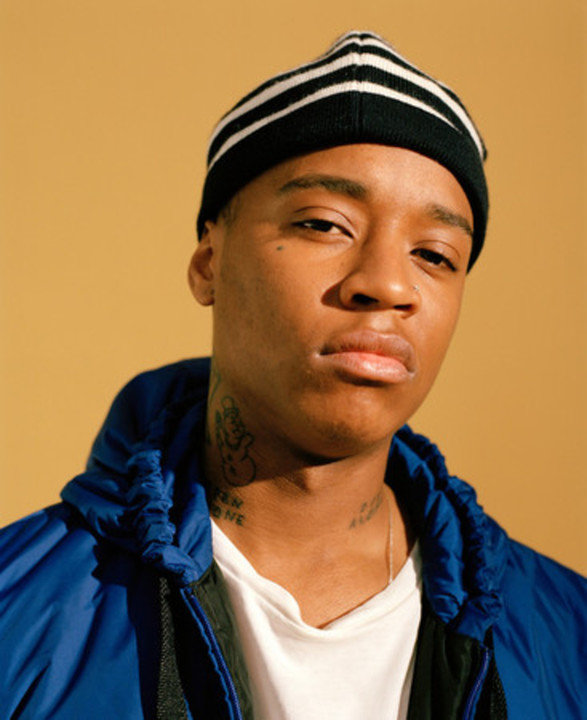 By most metrics, Rejjie Snow appears to be a rap artist and that’s technically true. But he doesn’t see it that way, and in any case the simplicity of the label (or any label, really) obscures what makes him different, which is pretty much everything. “I thought I’d be blacklisted from hip-hop for being Irish,” he says, but that’s only the most obvious thing setting him apart. It’s not just that he grew up the only black kid on Dublin’s Northside, where there’s no music scene to speak of. It’s that Rejjie is a scene unto himself. He lives wherever his suitcase settles, wherever the songs send him — Los Angeles, New York, London — making albums in the middle of making other albums, and tangling words into beautifully complex knots that blur biography with fantasy over a shifting mass of rainy loops, technicolor keys, and trippy percussion. And then there’s his voice, deep and otherworldly, capable of riding a beat with metronomic precision, cooing to raw piano, or yawping Prince-like over a soul-rock-jazz groove. His influences are as disparate as George Michael and Charles Bukowski. He designs clothes and paints. He sees the moon as his first love. He almost had a career as a soccer star, but instead Rejjie has toured with Madonna, recorded with left-field dance genius Kaytranada and, after signing to 300 Entertainment in 2016, become labelmate to other outsiders like Young Thug and Fetty Wap.

To be fair, the Irish thing is pretty important to Rejjie becoming the proud and fearless creator that he is. He was nurtured with the perfect combination of feeling free — his parents supported his interests and their Drumcondra neighborhood was nice enough — and out-of-place — his friends were all white and listened to techno. Dad was a software engineer born in Nigeria and mom, who worked retail, was Jamaican-Irish. He went to theater school, practiced sports, and began his hip-hop education via Playstation games like Grand Theft Auto and Tony Hawk, plus learned about Wu-Tang and Nas when an older cousin from Nigeria came to visit. In quiet, he’d trawl YouTube and mimic his favorite bars (many of which came from MF DOOM back then). By 17 he was booking studio time and getting in trouble for graffiti. None of that stopped him from moving to Florida to attend a prep school on a soccer scholarship. Except, “I dropped a track on YouTube a couple of months before I left for America,” says Rejjie. It was “Dia Dhuit,” Gaelic for “hello,” under his old name Lecs Luther. “Suddenly it’s doing 50,000 views a month and I’m out there trying to do football.” A year later, after he transferred to the Savannah College of Art and Design, Elton John’s management company sent a black SUV to pick Rejjie up in the middle of class. Naturally, he signed with them, dropped out of college, and started taking music seriously.
Rejjie moved to London on his own, couch-surfing with friends and building a community of like-minded music friends through Soundcloud and, occasionally, hitting up their managers (which is how he came to be sitting on a treasure trove of unreleased collabs with buddy King Krule). This is where the man born Alexander Anyaegbunambecame Rejjie Snow. He dropped the Rejovich EP in 2013 and, for a brief moment, outdid Kanye West and J. Cole on the iTunes hip-hop chart. And then our hero kinda disappeared for a minute. As interest in him spread, Rejjie, who admits to being shy, took time out to deal with family stuff and get his career right. He was coaxed back out in 2015, understandably, by the opportunity to open for Madonna on her Rebel Heart tour. It was kind of a disaster — “Sound for my set was terrible, there were 20,000 people booing,” he says, “I still wonder why she hit me up” — but the gig got him thinking about his now fiery band-backed live show. And the gig was bookended by a spree of new music: the Pharrell-channelling “All Around the World” produced by Cam O’bi (Chance the Rapper, Vic Mensa) and with a video starring Lily-Rose Depp; wobbly Kaytra team-up “Blakkst Skin,” about interracial romance; and the double-sided “Keep Your Head Up” single, a positive cut anchored by his soothing baritone. That was the first of many 300 Ent. releases as Rejjie gradually unveils the extent of his artistry.
Rejjie’s debut album is on the way. It’s executive produced by Rahki, who won a Grammy with Kendrick Lamar, and it’s already given us a handful of impressively (though not unexpectedly) diverse gifts. There’s the moody G-funk of “Crooked Cops,” which Rejjie wrote after watching police violence explode in the U.S., and the thrilling “Flexin’,” a hypermodern trap-addled bleak-banger full of unapologetic braggadocio. The chiming “D.R.U.G.S.” already surpassed 4 million YouTube streams and its followup, “Pink Beetle,” was named “Hottest Record in the World” by BBC Radio 1’s Annie Mac. And this time, rather than retreat amidst growing anticipation, Rejjie went ahead and dropped a full-length mixtape on the way to releasing his LP: 2017’s The Moon & You, an experimental beast of a different stripe that, despite a Joey Bada$$ cameo, puts him more squarely in the camp of genre-less auteurs like Shabazz Palaces, Anderson .Paak, and Thundercat. “That was just some shit I made that needed to get out,” says Rejjie. “I’ve always done things impulsively — I made Moon over a three-week period.” Which is wild to think about. That a guy who says he barely even listens to rap anymore could so thoroughly flip the art form with less than a month to do so speaks volumes to the potential he packed within his slim frame. And it’s all the more reason to pay close attention to his music, whatever you want to call it. The next opportunity is appropriately astral — a brand new single called “Virgo” which is already shaping up to be Rejjie’s biggest song yet as the recipient of Track of the Week accolades by three BBC Radio 1 DJs in Annie Mac, Clara Amfo and Adele Roberts. By those metrics, Rejjie Snow appears to be a rap artist on his way to