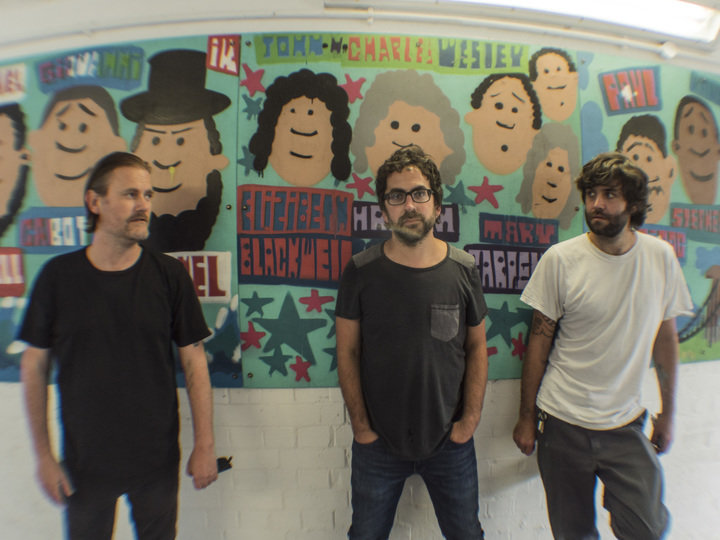 Featuring members of Portishead and Moon Gangs, BEAK> is a trio crafting dense and atmospheric music inspired by dub, Krautrock, and the Beach Boys. The moody sound of albums such as the group’s self-titled 2009 debut made BEAK>’s music a perfect fit for soundtrack work, which included 2016’s Couple in a Hole soundtrack.

The band began in late 2008, when Portishead producer/multi-instrumentalist Geoff Barrow, bassist Billy Fuller, and keyboardist Matt Williams jammed at Invada Records’ Christmas party, then started playing as BEAK> early in 2009. They recorded their debut album in 12 days with a strict set of rules: the trio members recorded all of their parts in the same room, and no overdubbing was allowed. BEAK> arrived in fall 2009 via Ipecac in the U.S. and Invada in the U.K., just before the group made its official live debut at the Ten Years of ATP Festival.
That year, Barrow met and signed the German political journalist turned post-punk singer Anika, with whom BEAK> recorded her 2010 eponymous debut album. He also kept busy with a number of other Invada-related projects, including Quakers, an underground hip-hop collective, and Drokk, a collaboration with composer Ben Salisbury inspired by the long-running comic strip Judge Dredd. Quakers’ self-titled album and Drokk: Music Inspired by Mega-City One both arrived in early 2012, shortly before a new BEAK> album, >>, appeared. That year also saw the release of the Mono/Kenn single as well as a split single with DD/MM/YYYY.
The group returned in 2015 with the BEAK> ‘s score to Belgian director Tom Geens’ psychological drama Couple in a Hole, which featured tracks from the band’s albums as well as new original material, arrived in May 2016. That year, Williams departed the group and was replaced by Will Young, also of Moon Gangs. In 2017, BEAK> released two singles: June’s Sex Music, which featured a remix by Arcade Fire’s Win Butler, and that December’s Merry Xmas (Face the Future), which benefited the mental health resources The National Elf Service and The Mental Elf. L.A. Playback, a digital collection of B-sides and rarities, arrived in April 2018.