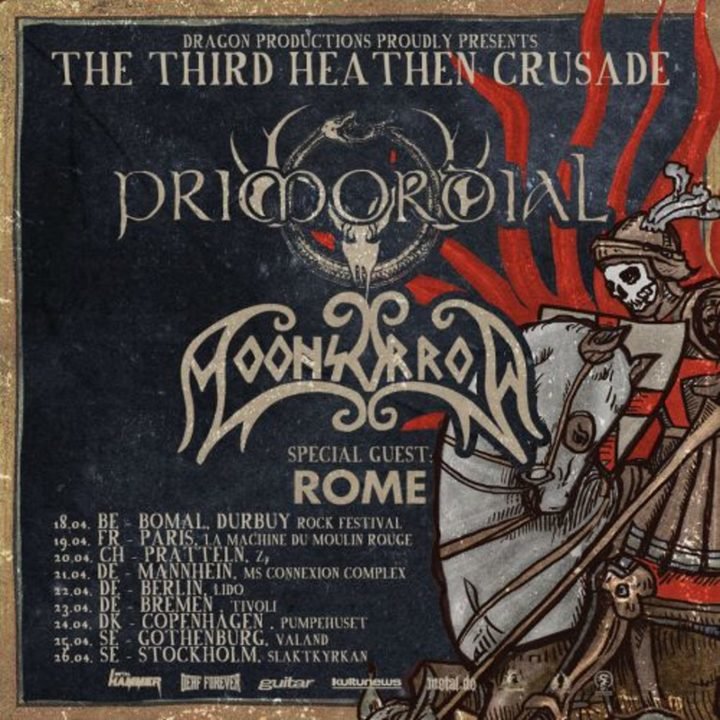 PRIMORDIAL and MOONSORROW return for their third Heathen Crusade!

14 years after their first European ‚Heathen Crusade‘ and only 2 years after the second Crusade, Primordial and Moonsorrow will invade Europe again, bringing their double co-headliner brand to another 6 European countries during 9 days.

As very special guest they will bring the neo-folk one man act ROME to round up the tour package.

The time has come for Heathen Crusade 3. We shall join forces with our brethren Primordial from the Republic of Ireland! We have toured together many times since 2006 and it’s about time we bring this package to some new cities as well as familiar ones. The age of gods has come to the age of man and this will be the last tour before the next chapter in Moonsorrow.”

“With great pleasure we can announce a further chapter to the Heathen Crusade Legacy with our brothers from Moonsorrow. Some different cities and different countries we have never brought the Crusaders to! We will be playing a set of songs from the wilderness in our catalogue. Rarely heard 5nd obscure songs that rarely get performed. We also add the neo-folk musical cutural phenomenon of Rome to the bill as something unique and different. See you all again soon”