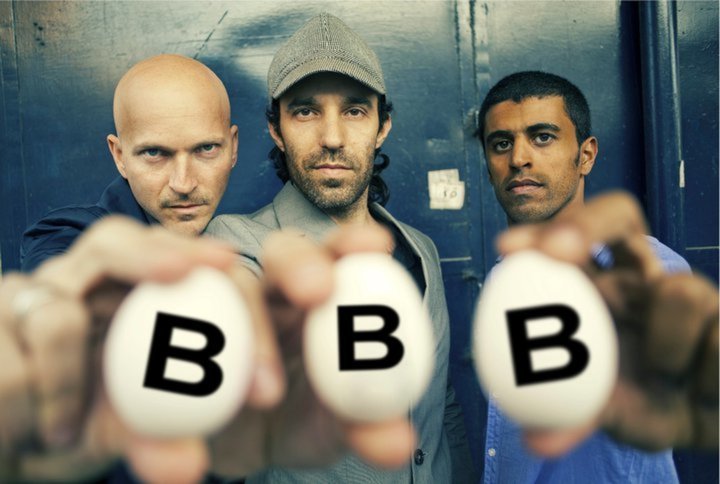 For the uninitiated, Balkan Beat Box first burst out of New York City’s underground music scene in 2005, with a self-titled debut that introduced the world to their Mediterranean-inflected, globalized electronica sound.

Inspired by last year’s people’s protest movements across the globe – from the Arab Spring, to Occupy Wall St., to Israel’s own massive social protests Balkan Beat Box's new album Give captures the cautious hope and re-energized spirit of our time.

Brimming over with handcrafted beats and samples, and recorded primarily at Tel Aviv’s Vibromonk East studio, Give was conceived of as “a smaller, more introverted album,” according to Ori Kaplan. “It was fun for us to see what just came out of the three of us while we played with old analog synths and children’s toys”.

“This is our most hardcore album so far,” says Tamir Muskat. “Definitely musically – there’s more of a harder-edged, electronic sound. The songs and their subjects are also kind of darker and more political.”

One of the other animating forces on Give is fatherhood – all three members have become fathers since the recording of their last album, and Tomer explains how that influenced the band’s outlook: “When you have kids, you become a little more aware of what’s happening in the world and what kind of world that we’re leaving your kids. “

“It was kind of a crazy vibe in the studio sometimes,” Tamir laughs. “We were recording some of our most hardcore songs ever, but our kids would be there, too, running around and playing in the middle of everything. I think it gave things a hopeful vibe, too… it reminds us that we’re fighting for something, not just against everything.”
Share This
Previous
All
Next