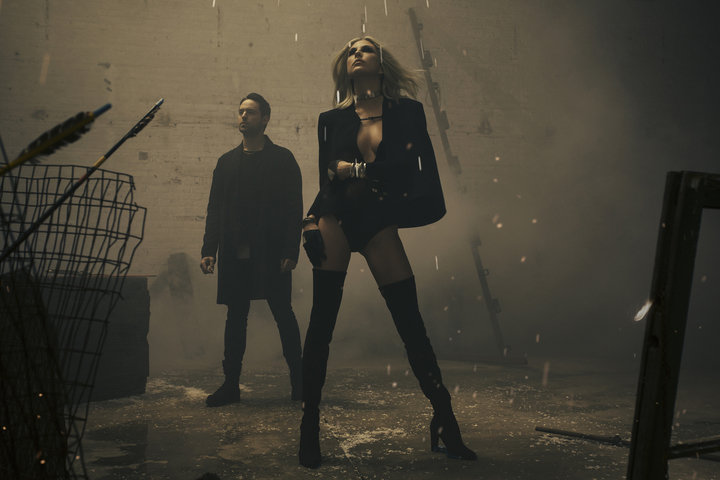 PHANTOGRAM’S universally applauded duo, Sarah Barthel and Josh Carter, have been crafting their own blend of genre bending music since 2007 when the longtime friends first formed their group in the small city of Saratoga Springs in upstate NY. Known for their innovative music style- melding electronic, melodic indie rock with hip hop leaning beats & samples- the band independently released music and toured incessantly before the debut of their breakthrough album, VOICES, in 2014. Upon its release, VOICES, which was co-produced with John Hill (M.I.A., Santigold), achieved unanimous critical acclaim. The Associated Press hailed it "an epochal album, a generational capstone that will reside in playlists for a generation to come", and SPIN named it one of the "50 Best Albums Of 2014"͟. The album made an impressive #1 debut on iTunes ’Alternative Chart and #5 on iTunes ’Top Album Chart. VOICES also yielded the multi-format anthem Fall In Love, which landed in the Top 5 at Alternative Radio and Top 25 at AAA. It was also the #4 ͞Most-Shazamed Rock and Indie Song of 2014. The band has since been on the road and collaborating with an impressive group of artists across the music spectrum, including The Flaming Lips, Miley Cyrus and Big Boi – the latter of whom formed a new group with Phantogram, BIG GRAMS, resulting in the release of a self-titled debutalbum (featuring its own collaborations with Skrillex and Run the Jewels, and a psychedelic animated short film project with Adult Swim) in 2015. Up next, Barthel and Carter will perform a handful of 2016 summer festival dates with Big Grams, including Governor’s Ball, Bonnaroo, Lollapalooza, and Outside Lands, before releasing their highly anticipated new Phantogram album.