"Good news/bad news. I’m working on the new album but still needing to carve out some extra time to give it the energy it deserves. As a result we’re needing to move some things around with our tour schedule and will need to come back through Europe later next year. Amsterdam, UK, and Ireland are still good to go. Refunds will be made available through each venue." 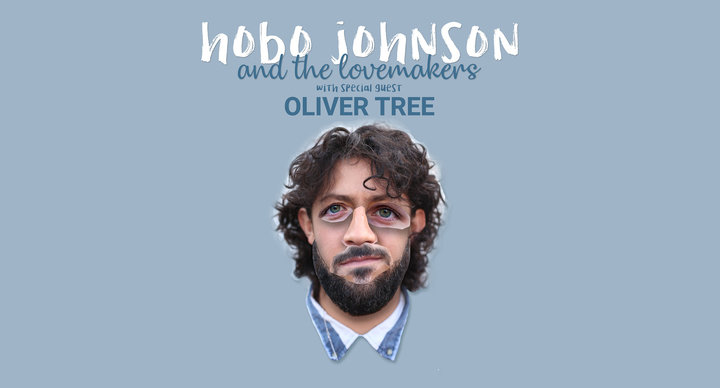 Sacramento, CA alternative hip-hop artist Hobo Johnson is Frank Lopes Jr; often backed by his bandmates “The Lovemakers.” In November 2017, Hobo Johnson released the record "The Rise of Hobo Johnson", which Frank wrote during a time he had to live out of his ’94 Toyota Corolla -hence his self-given pseudonym. On April 17, 2018, Hobo Johnson released the highly anticipatedsingle “Peach Scone” (both the studio and live version), which debuted on Spotify’s New Music Friday. The new single comes on the heels of Hobo Johnson’s ”Peach Scone” live performance video, which was posted online as a submission for NPR’s Tiny Desk contest. The live video of that unreleased track got Hobo Johnson much more than expected. In just 7 weeks, the “Peach Scone” video racked up over 14.6 million views on Facebook and YouTube. Across all socials, their followers have grown from 10,000 total to well over one million followers. Their fervent new fans boosted the 2017 "The Rise of Hobo Johnson" album to #8 on the iTunes Hip-Hop chart and #11 on Billboard’s Heatseekers chart. Hobo Johnson has also caught the attention of big media players like MTV who tweeted “Very much in love with @_hobojohnson” and a feature from Perez Hilton and The Needle Drop. Five different songs from The Rise of Hobo Johnson have charted on Spotify’s Global Viral 50, US Viral 50, Australia Viral 50, UK Viral 50, Canada Viral 50, Philippines Viral 50, Spain Viral 50, NZ Viral 50, Ireland Viral 50, Netherlands Viral 50. It has also appeared on on Spotify’s Tear Drop, Viral Hits Canada, Viral Hits AUS & NZ. This year, fans can look forward to more US and international tour dates from Hobo Johnson & The Lovemakers